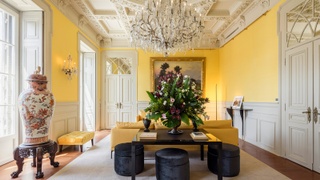 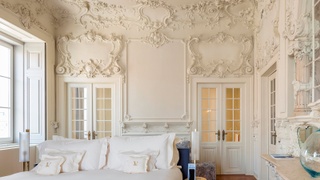 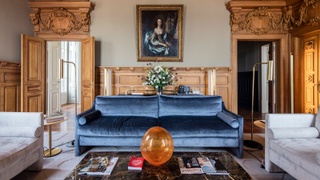 For yacht lovers, it’s hard to picture a more idyllic hotel than the newly renovated Verride Pala?cio Santa Catarina. From that elegant, historic townhouse in the heart of Lisbon, rooms look out on to the peaceful sight of yachts sailing back and forth across the Tagus River. The building dates back to 1755, and from 1910 it was the personal home of the Count of Verride. New works on the building began in 2010, headed up by architect Teresa Nunes da Ponte, who worked alongside interior designer Andrea Previ, opening officially earlier this year.

The hotel is an ode to contemporary design, with bespoke pieces balanced perfectly with original features. Neutral tones unify individual rooms, while punches of colour add interest – from rich yellow walls inspired by the Sir John Soane’s Museum in London to sculptural glass orange vases created for the hotel by Claudio Buarque of Galeria Diferenc?a. Artworks by Coca Froes David and Paul Robinson, meanwhile, reflect the blues and golds of the sunlit waters outside. Bold ceramic lights were sourced from local atelier Caulino, while minimal tables and consoles made in bronze or brass and woollen rugs were supplied by local artisans. Textures are well balanced – cool marble and limestone are offset by rich velvets and linens. The end result is grand yet serene. In fact, it’s easy to feel at home here. If only...

The building: A historic 1755 townhouse, and the former home of the Count of Verride
The rooms: Nineteen, plus many suites – book the 80m2 Royal Suite
The restaurant: Contemporary Portuguese cuisine is served at Suba restaurant, while the hotel’s Rooftop Bar has a 360 degree view of the city

Suite Success: 5 of the world's most extravagant hotel suites

The best luxury hotels in the Mediterranean to visit by yacht