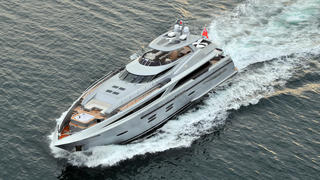 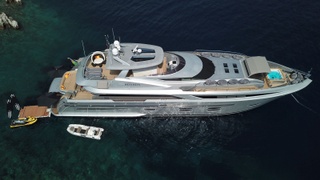 The 35 metre motor yacht Meya Meya, listed for sale with Equinoxe Yachts International, has been sold in an in-house deal.

Built in cold moulded epoxy by Turkish yard Logos Marine, Meya Meya was delivered in 2010. Ed Fry handled the naval architecture while H2 Yacht Design were responsible for both the exterior and interiors.

Meya Meya can sleep up to 12 guests in five en suite cabins, three of which are full-beam with king sized beds and filled with light thanks to windows to both port and starboard. The main deck master cabin features a desk, sofa, a 55-inch TV and a Sonos sound system. Additional accommodation can sleep a crew of seven.

For afternoons in the sun, the foredeck houses a seating area with a teak table that overlooks a Jacuzzi, and a new custom Bimini for shade. Meanwhile al fresco dining is offered on the flybridge, shaded by a hardtop Bimini.

On the aft deck, there's a large sun bed and lounge area with a sofa and teak table that can transform into two smaller coffee tables for post-dinner coffees. Inside, Meya Meya's full-beam main saloon features a more formal dining option complete with a granite bar and stools.

Once the jet tender and Jet Ski have been launched from the garage, a swim platform becomes a seating area with deck chairs for sunbathing at the water's edge. In 2016 the owner purchased two inflatable platforms which are configured into an L-shape as an extension of the swim platform, making it easier for guests to hop on and off of her water toys.