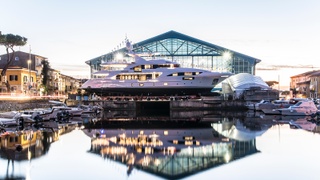 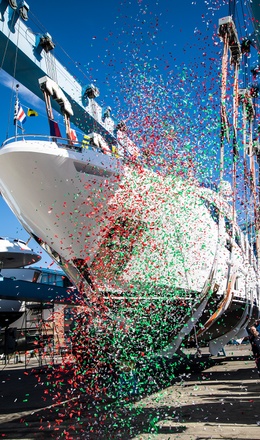 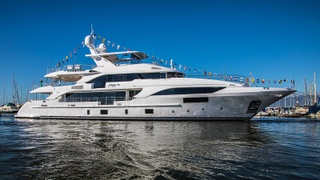 Benetti Launches 29 Metre BD106 and 40.2 Metre Happy Me in Viareggio

Italian yard Benetti has launched two superyachts in the space of two days at its Viareggio based yard.

The first was the sixth hull of Benetti’s Delfino 95 series, BD106, which hit the water on February 6. The 29 metre composite superyacht was previously sold to a Cypriot owner and has been designed by Giorgio M Cassetta.

With a beam of seven metres, the yacht has been described as “refined and elegant” with “extensive glazed surfaces”, by the yard.

The interior meanwhile was designed in-house and features materials including wood and marble for a “warm setting”.

Accommodation on board is for a total of 10 guests in five cabins comprising an owner’s cabin on the main deck, which sits at the bow and is furnished with a double bathroom with a marble shower. The remaining guest accommodation of four double cabins sits on the lower deck. The bow area meanwhile is reserved for crew accommodation for a total of five crew in three cabins.

The 14th hull in Benetti’s Classic Supreme 132 series, Happy Me, hit the water the day after BD106 on February 7.

The 40.2 metre displacement yacht, which has a German owner, features exteriors by Stefano Righini and interiors penned by Fran?ois Zuretti.

Accommodation on board is for 10 guests in an owner’s cabin on the main deck and two VIP and two double guest cabins on the lower deck. Crew accommodation at the bow is for seven in four cabins while the captain’s cabin sits on the upper deck.

Speaking at Happy Me’s launch ceremony, the owner said: “I’m very grateful for an impressed with the passion and devotion shown by Benetti throughout the construction of this yacht.”

Power comes from two MTU 12V engines for a top speed of 14.5 knots and cruising speed of 11 knots for a range of 3,200 nautical miles.